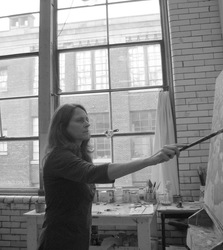 Jennifer Krause Chapeau was born in 1962 in Norwalk, Connecticut. She received a BFA from the University of Michigan School of Art, Magna Cum Laude, in 1984. There she met and studied with Rudolf Arnheim, a pioneer in psychology, visual perception and art; and Gerome Kamrowski an early collaborator with Jackson Pollock. Krause Chapeau moved to New York city and studied at the Studio and Forum of Stage Design, with Lester Polakov, from 1985-87. She gained entrance to The United Scenic Artists Union, Local 829, in 1987, and worked as a freelance scenic artist on major motion pictures and television shows. Scenic painting exposed Krause Chapeau to a wide variety of painting techniques and materials, which influenced her textural works of the 1990's.
In 2000 she was included in the New Jersey Arts Annual, Into the Millenium, at the Newark Museum. One of 14 artists chosen from across the state, the show included such noteworthy artists as, Sandy Skoglund, Robert Lobe, Geoffrey Hendricks, and Mac Adams. Her work was mentioned in two New York Times reviews of the show, and in the introduction of the exhibition catolog by Joseph Jacobs, then curator of american art at the Newark Museum. He said" These paintings powerfully capture an aspect of contemporary life: the way in which we rely so heavily on our cars, often traveling long distances on a daily basis, and experiencing landscape and life at a very fast pace. There's a meaningful emptiness in these pictures, which seem to be a commentary on our lifestyle." Co-curator Fred Wilson said of her work " The banality of the image says much more than would seem possible. Her work forces the viewer to focus on the everyday. These images are of fleeting memories- very familiar, yet they are impossibly strange when captured as they are in her paintings. This irony keeps me looking at them".
In 2002 she was included in "American Landscapes 2002" curated by Darsie Alexander, of the Baltimore Museum of Art.

Krause Chapeau has shown her work in galleries in  NY , NJ, Maryland, Michigan, and France. She has work in private collections in  New York, California, New Jersey, New Mexico, Michigan, Maryland, Washington DC, England and France.
She lives with her husband and three children in Jersey City, New Jersey, and works in her studio at Mana Contemporary, also in Jersey City.
Loading...